Kheni Priest is “five foot nothing” and in her late twenties with blonde hair. Her small hands are adorned with silver rings and her long nails (her own!) are painted aquamarine overlaid with glitter. She defies the typical stereo-type of the Hatton Garden jeweller, although she’s no pushover when it comes to dealing with her more robust customers.

I’m buzzed into a small glass fronted shop and am warmly greeted by Kheni, who offers me a mug of tea. We head down to the compact, well organised workshop in the basement where assaying and hallmarking takes place – the marking of items made of precious metal from jewellery to vases for clients working in Hatton Garden. Four people (three women and one man) are sat at their benches hallmarking. Kheni and I find a spare space nestled between the benches and settle down for a chat, accompanied by the sound of hammers tapping onto metal punches into metal items, the light thrumming of the laser-mark machine and the easy banter of the team.

“The thing that inspires me most is if someone says I can’t do something."

As soon as they’ve said that I’ll think, ‘well I want to do it now’. That's it. You've inspired me. I'm going to do that.” Kheni tells me. “I remember thinking when I first had my interview with the Assay Office, walking past the handmarking bench and I thought, ‘That's where I want to be’. I want to be a hand marker” she says, eyes-bright and a genuine passion in her voice.

Kheni has been hallmarking jewellery and other things made of precious metals – with a brief interlude (three months) working as an apprentice at a jewellers in Hatton Garden – for 13 years. She was promoted to Supervisor in 2019 which was “a career highlight”. “When I explain to my mates what I do I normally just say, we test precious metals, authenticate them and put our mark on it, which means that what you’re getting is real and not fake.” 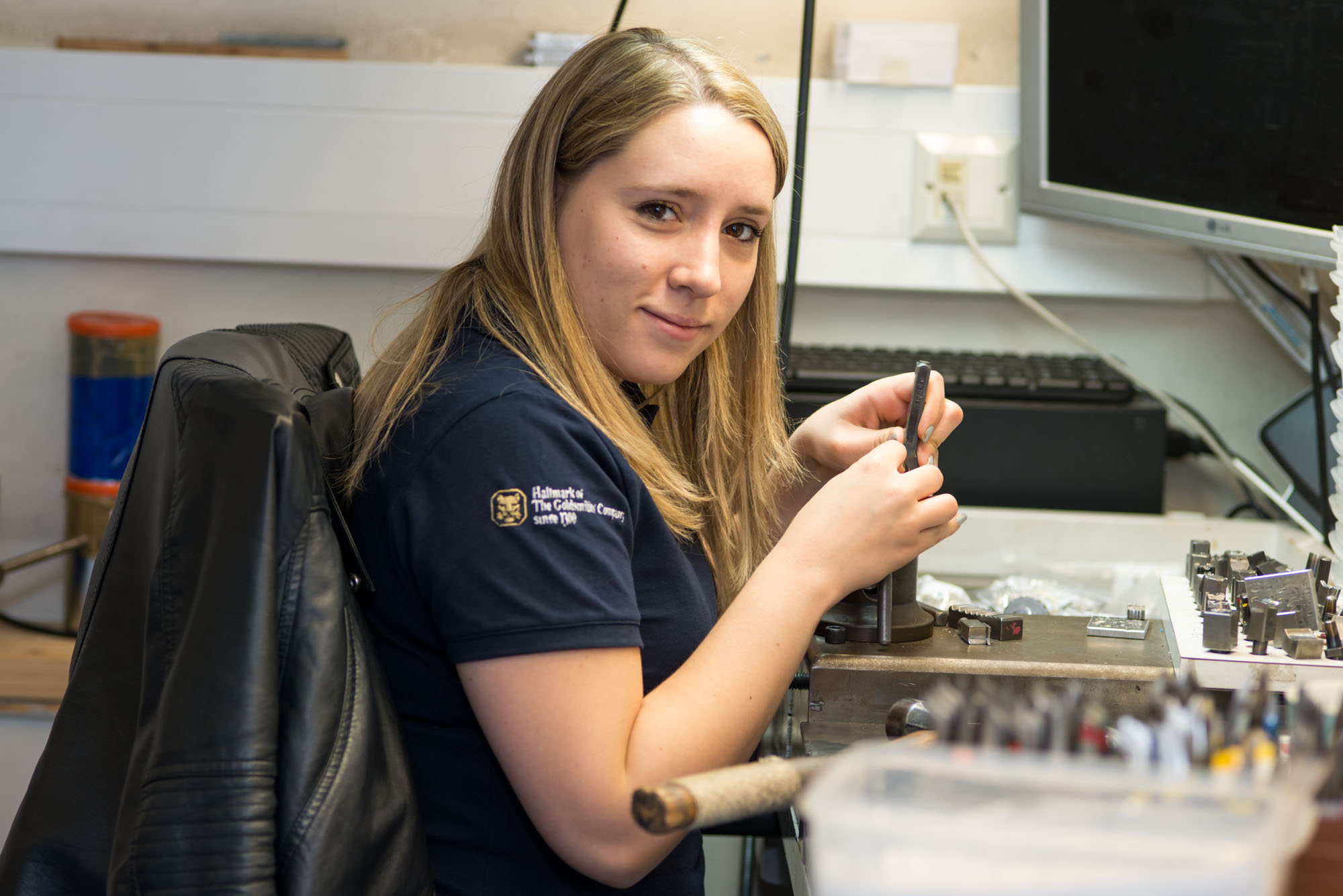 At school Kheni didn’t know what she wanted to do as a career. Her mum worked for the Goldsmiths’ Company Assay Office at Goldsmiths’ Hall (head office) and they were looking for temps. “I literally finished the last day of my exams at school on the Friday and the following Monday I walked into the Assay Office, aged sixteen,” she tells me.

A Woman in the Workshop

Her experience of being a woman in the workshop has mostly been positive: “I'm quite lucky because we outnumber the men in the Assay Office workshop – it’s always been like that. It’s really good being a woman here. And the men are great, they are understanding, and they're not there to wind us up or anything like that!” Kheni tells me. “We're such a tight knit group in this office. If you’re having a bad day everyone’s so understanding.”

But there have been times when she has had to deal with chauvinistic behaviour from customers:“The majority of our customers are also lovely, but you do get the odd customer that won't talk to you because you're a woman – female customers as well, not just men,” she says.

“There’s been times when a customer would come in with a question or a complaint. I’d tell them the answer, but they didn’t want to listen. My manager [a man] would come along and say exactly the same thing as me. And the customer would go 'Right. No worries. Cheers mate,' and walk away. And I was like, ‘What just happened?' It’s not like that now – I put my foot down!”

When Kheni first started working in Hatton Garden she says it was “all the old boys” who were customers “old fashioned jewellers, silversmiths, goldsmiths”. But they have more female customers today who are typically jewellery designers rather than jewellers.

“There are lots of designers, women designers, I don't think there are nearly enough women jewellers. I don't know if that's their choice. I don't know if they don't want to get their hands dirty – it’s not glamorous work. When I worked as an apprentice in a jewellery workshop on the Garden, I literally had to cut my nails off, because they were getting in my way. And I was like, 'Alright, off come the nails, gloves on, let's do this'.

She says she is concerned about the limited opportunities for women to find work or get on an apprenticeship with a jewellery workshop and feels that the experience can be off-putting because of the culture.

“I briefly did a stint as an apprentice jeweller. I couldn't wait to get out of there. It was very masculine. They’ve got their banter and I didn't want to come in [to work] and be spoken to like I'm one of the dudes. I'm not. And they were always too busy to help. It was like they wanted me to fail. And at the end of the day, five o'clock, it was like, 'Yeah, here's a score, can you go around the shop and get us a load of beers?' I didn’t last long.”

Rolling with the punches

Kheni says that she loves her job at the Assay Office which also involves training apprentices in hallmarking, and requires lots of patience and understanding, especially when things go wrong. “Andy, my manager, has always taught me that if you've never made a mistake, you've never made anything. So, we're allowed to make mistakes. The key to it is if you make a mistake, say something – that’s what I always tell the people that I train. There's no point shouting at someone, because all you're doing is knocking their confidence out of them.”

“When I first started I really did not want to hit it [the punch]. It might be one article in a thousand that we're dealing with that day, but to the customer, that's their one article. They don't have a spare or a back-up plan, especially for custom pieces. Of course, there are times when you do miscalculate, and you put a mark in the wrong place. I've miscalculated before. Our job is to please the customer and if we make a mistake – which we always tell them about – nine times out of ten we can find a solution.”

So, what would Kheni’s advice be to aspiring female hallmarkers? “Don't give up, don't lose the battle so quickly, stand your ground. Because you will get somewhere, you really will, you will win."

"You've got to be determined".